Natasha Sekhon: What Stalagmites Can Tell Us About Climate Change

In most of her pictures, Natasha Sekhon flashes a bright smile, conveying the same “Welcome!” message that greets visitors to her website. Her conversation, which she dots with enthusiastic remarks and laughter, achieves a similar effect. So, given Natasha’s personable nature, it’s no surprise that she is a community-oriented scientist, eager to help the world through hard work and collaboration.

Natasha, who received her PhD in geological sciences from the University of Texas, works with Professor Dan Ibarra as a Voss Postdoctoral Research Associate and Presidential Diversity Postdoc Fellow in IBES and DEEPS. As a terrestrial paleoclimatologist, she researches past climates in order to better understand our future under climate change. And she does it with the help of caves.

“Specifically, I use the geochemistry of layers within stalagmites,” she says. Stalagmites extend up from the ground of a cave; they’re formed when minerals drip from the cave ceiling and accumulate below. “If you think of stalagmites, they’re pretty much like tree rings, but they’re recording what’s happening in the climate above the cave. And we can go and collect the stalagmites, open them up, and then have these laminations, the geochemistry of which can tell us something about past climate change.”

For her postdoc project with Dan, she is investigating how the climate in the Philippines has changed. By working closely with local researchers, she has begun setting up the first-ever active cave monitoring station in the region.

“We have three caves, we are collecting drip water to try and understand the cave chemistry, and we are also getting the geochemistry from stalagmites to tell us something about past floods and drought events” Natasha states. “Understanding the flood cycles can tell us something about where we are headed with climate change as the monsoon, typhoon, and El Niño seasons get unpredictable with changing severity and frequency.”

But Natasha is not always abroad; during her time in Providence, she has spearheaded a new method that uses a laser to analyze the elemental concentration of stalagmite layers in the geochemistry labs. These efforts, coupled with her work in the Philippines, earned her a Postdoctoral Excellence Award for Research/Teaching in June. The award honors a postdoc “whose leadership and depth of involvement will leave a significant impact on their scientific field, students, and/or the Brown community,” according to the initial announcement about the winners.

It’s rather incredible, given all that Natasha has accomplished at Brown, that she has only been here for one year. She says that she owes some of her success to the unique interactions she has had as both a Voss and Presidential postdoc.

“As a Voss postdoc, it’s really nice to have engagement through other Voss postdocs,” she says. “We’re all studying climate change, but we’re all tackling it from different perspectives. It’s a lot of fun because that instills ideas on potential papers that we can work on together and collaborations that we can have, which isn’t common in other programs. Similarly, with the Presidential postdoc, we come from different fields, and we meet once or twice a semester with the president of diversity, and we talk about being in academia, how to approach a tenure track position if you’re interested in that, and what kind of questions to think about. I think with both of the fellowships there’s this system – sometimes postdocs are nebulous positions and we get lost, but having these networks has been really good.”

As she heads into her second year with IBES, Natasha shows no signs of slowing down. At the end of July, she presented some of her laser data results at the KR9 Climate Change conference in Innsbruck, Austria; in the fall, she’ll co-teach a historical climatology course with Dan while continuing her cave research. She describes her upcoming endeavors with trademark zeal and passion for collaboration.

“I’m super excited that we’ve set up this field partnership [in the Philippines],” she says. “To have this continual data coming from the Philippines will not only help us better understand floods and typhoons, but it will help others too. For example, we’re working with local government units over there to send them the data and final results that we have, so they can use that and help inform communities that they work with.” Once Natasha has completed her postdoc experience, she intends to become a tenured professor. “Once I get a professor job, one of my dream projects is to try and understand monsoon variability in India,” she muses. “I’m originally from Punjab, which is in North India, and it’s considered the breadbasket because there’s a lot of agriculture there. But with the changing monsoon, we don’t really know how the farmers will be affected, how agricultural crops will be affected. I would like to go back and start a project there as well – again, to better understand the climate and work with local governments, local NGOs, non-profits, and the caving communities.”

While much of her work is data-driven, Natasha clearly strives to extend her efforts to the societal sphere. “When I do science, I always look for places where I can have that impact on people,” she says, “and where I can have a holistic understanding of how the climate is changing and affecting people. I think that’s the cool thing about IBES – it’s environment and society. They go hand in hand; I can’t see one without the other.”

Congratulations to Natasha on a year well spent. IBES is proud to honor her and her work – past, present, and future. 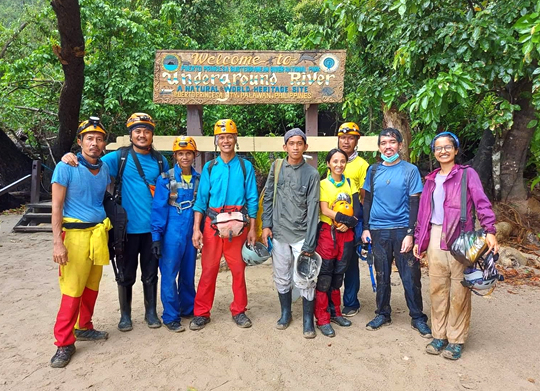 Lily Lustig is a senior at Brown concentrating in English and Environmental Studies on the Land, Water, and Food Security track. She has written articles as an IBES communications intern since February 2021.